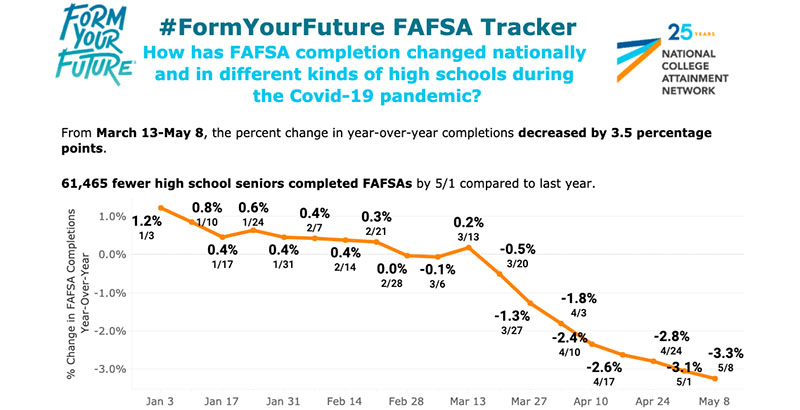 When many High School Juniors started applying to college last fall, they're not sure how they are going to pay for it. The first step? Filling out the Free Application for Federal Student Aid (FAFSA). In many Districts it is a requirement not only to get money for college but also to earn their high school diploma.

Three years ago, Val Verde Unified (California), became the first to make completion of a financial aid application — either the FAFSA or California Dream Act Application — a graduation requirement. In the first year of implementation, the district’s financial aid completion rate rose significantly, from 69 percent to 83 percent. College enrollment rates went up too, from 56 percent in 2017 to 61 percent in 2018.

Val Verde isn’t alone. Across the country, a growing number of districts and states are considering similar mandates due to the strong correlation between completing the FAFSA and starting college immediately after high school.

Traditionally, students don’t fill out financial aid forms for a number of reasons: because they believe they’re ineligible, they find the application confusing, they don’t have support at school or at home or, for undocumented students, they are worried about sharing personal information for fear of deportation. But nationally, students who complete financial aid applications are 82 percent more likely to go straight on to higher education than their peers who don’t finish the forms. That number jumps to 127 percent for students from the lowest-income backgrounds, according to the National College Attainment Network.

In the first year after Louisiana mandated FAFSA completion — the first state to do so — its overall rate topped 77 percent, compared with less than 70 percent nationally. In both 2018 and 2019, Louisiana had the highest FAFSA completion rate in the United States, and a record number of high school seniors went to college immediately after high school in 2018 — almost 1,600 more than the year before.

Integrating financial aid applications into high school really normalizes the experience of application completion for students so that it becomes a standard rather than an afterthought.

However, the coronavirus is undermining those efforts. Since schools nationwide shut down in mid-March, there has been a 3.3 percent decline in FAFSA completion among high school seniors compared with the same time last year.

This means fewer members of the Class of 2020 will likely go to college next fall because of the pandemic. This isn’t just a numbers game. Every one of those FAFSA completions that doesn’t get done by the end of this cycle represents a student potentially leaving money on the table that would help them finance postsecondary education.

The same thing is happening among those currently enrolled in college. Compared with last year, some 250,000 fewer low-income college students have renewed their FAFSA, and overall renewals have declined about 5 percent, representing more than 350,000 students. Between March 15 and April 30, nearly 17 percent fewer returning Pell-eligible students filed FAFSA renewals compared with the same time last year. The number was down almost 20 percent among students with incomes of less than $25,000.

As of May 8, more than 66,000 fewer high school seniors had completed the application than the year before, leaving approximately $105 million in unallocated Pell Grants unclaimed. In Louisiana, about 2,900 fewer students have completed the FAFSA than last year — a more than 8 percent drop. At a time when students aren’t even sure they’ll be able to finish their senior year classes, Louisiana has waived the FAFSA graduation requirement for the Class of 2020.

Administrators know how strongly associated FAFSA completion is with immediate postsecondary enrollment after graduation. So where there are declines in FAFSA completion, one would also anticipate seeing plans change for the fall.

Even students who have completed the FAFSA may not enroll, given the uncertainty about what college will look like in the fall. A recent survey predicted a 20 percent decline in fall enrollment. Another study found that more than half of students were concerned that college enrollment might be delayed due to the coronavirus.

FAFSA completion rates have dropped even more steeply for students who attend high schools where at least 40 percent of students come from low-income families, and for those in rural areas.

It’s students at those schools who most often benefit from completing their FAFSA because it opens them up to things like the Pell Grant and other forms of federal and state aid.

FAFSA completion rates are down because students lack access to the internet at home to complete the process; because school counselors, who would normally help out, have lost touch with seniors or have trouble reaching them; and because, with the economic downturn, some families now need their children to contribute to the household income.

Many students need to work to help their families catch up on bills and assist their parents with providing basic needs, so not enrolling into a college for a year is their only option. The college process is already stressful for first-generation college students, and what they are experiencing now only continues to add to their list of fears and reasons not to attend. As a counselor myself, I along with my peers are attempting to balance supporting their basic and emotional needs while trying to inspire them so they don’t give up on the college dream they have worked so hard to achieve.

The decline in FAFSA completion is most likely hitting these students harder than their higher-income peers. Community colleges have later deadlines, and research shows that students from the lowest-income backgrounds, likely bound for two-year schools, file later than those who are wealthier and plan on attending four-year colleges.

In Texas and California, two of only a handful of states where FAFSA completion rates are up — though all those gains were made prior to mid-March — educators are struggling to guide students through the process from afar. Filing the FAFSA is challenging by itself, they say, and now nearly impossible with schools closed due to the coronavirus.

One estimate out of Dallas, Texas showed that 30 percent of 3,000 seniors have been asked to complete a FAFSA verification process that requires students to submit documentation to confirm the accuracy of their information. The vast majority of them are low-income.

It’s not the family that has a two W-2’s and can use the IRS data retrieval tool, for instance...the cookie-cutter clean easy verifications; rather it's families that have complicated situations or have their own businesses where they show a very low Adjusted Gross Income.

Parents who don’t have a Social Security number cannot sign their children’s FAFSA application electronically because it is required to get a PIN number.

They instead have to print out a signature page, sign it and mail it to the Department of Education’s Office of Federal Student Aid. Many students struggle with just having technology and Wi-Fi at home, let alone a printer.

Districts are having students upload a PDF signature page to a secure portal, printing it out for them, and then mailing the signature page along with a stamped envelope back to students so their parents can sign and mail it in. A process that should just take a few minutes is now at least two weeks for the lowest-income families nationwide. I worry for the students who do not have a counselor that can provide this type of support.

Next year, Illinois and Texas will follow in Louisiana’s footsteps, requiring all graduating seniors to complete the FAFSA, or the state equivalent, starting in 2020-21. California, Michigan, Washington, D.C., and Indiana have been considering similar requirements. Several California districts have followed Val Verde’s lead and require it at the local level. Other states, including Tennessee (currently No. 1 in FAFSA completion), haven’t mandated it for graduation but do require it to access state aid programs.

I believe the concept of the financial aid requirement is that it has raised awareness of college affordability. There are certainly a lot more conversations and presentations about financial aid with families, whereas previously the turnout would be a lot lower because it wasn’t required. Now, parents and students are far more informed about how to pay for college.

The financial aid requirement has been most helpful for students who plan to attend two-year schools. I personally have seen an increase in the number who enroll directly in community college without taking significant time off after high school. The students that would have gone to four-year schools would have typically done the FAFSA anyway.

For many students it is actually exciting. College is very expensive, and knowing that filling out the FAFSA helps to create a pathway for to afford college. Having resources from administrators really does help students out in most instances, especially first-generation students.

Critics of the mandate are concerned it might prevent students from graduating, but advocates point to an opt-out process for families who can’t or don’t want to provide financial information.

When you do it, you’re going to spend a lot of time chasing a metric that’s going to take time away from students who need access to quality college advising. There is a lot of focus on pressing ‘submit’ and no focus whatsoever on what happens once you press it.

And as someone who is responsible for guiding students through that process and knowing the amount of time that it takes, I am concerned about the allocation of further resources and significant professional development for people who are responsible for this.

School leaders who have experience with the mandate say support for counselors is essential, as are other efforts to promote college readiness. Many Directors and Lead Administrators say they involve administrators, teachers, student government leaders and community partners to make sure the initiative is successful and doesn’t overwhelm counselors. They also bring in an immigration attorney to speak with families concerned about implications for their status.

Education leaders are also experimenting with other initiatives in light of the nationwide decline. For example, former U.S. education secretary Arne Duncan has teamed up with the nonprofit Chiefs for Change and the data management firm Data Insight Partners to launch a competition, challenging 20 school districts to boost FAFSA completion rates. School and district progress will be tracked on a digital platform.

In some states, legislation requiring FAFSA for graduation stalled earlier this year, but advocates are still hopeful they will eventually pass. Students and parents will need this support and assistance more than ever to help make postsecondary education attainable. We are already hearing warnings from the nation’s financial aid administrators that coronavirus could severely impact applications — the impact on our undocumented/mixed-status families will be even greater — so this proposal is even more necessary.
- June 10, 2020