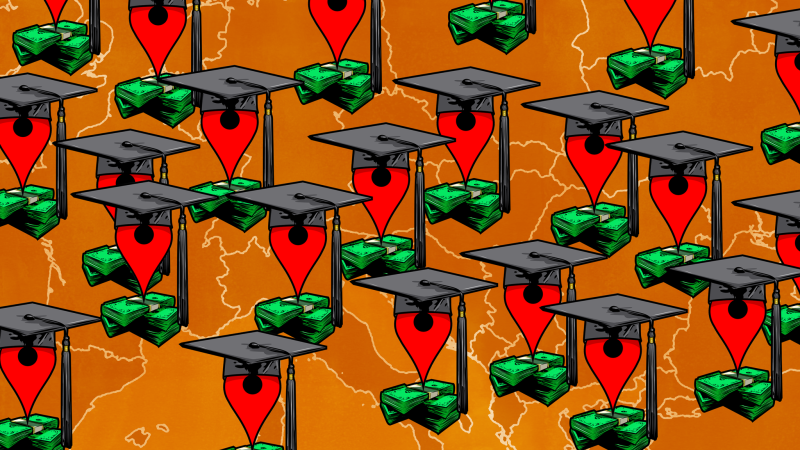 We all want that “finding myself through travel” experience in college, but going to school abroad seems like an impossible, expensive dream. Surprisingly, it’s actually cheaper in some cases, thanks to rising tuition costs in the States. But don’t hop on a plane just yet. There are a number of variables to consider.
On his website Take Risks Be Happy, writer Alex Webb explains his own college abroad experience:

“When I applied to university, I faced a dilemma. The schools I wanted to go to were unaffordable, and the schools I could afford to go to were boring, nearby state schools. I didn’t want to spend the next 4 years of my life 30 minutes from my home. I wanted to get out and see the world. Those goals seemed incompatible—but they weren’t. After ruling out expensive private or out-of-state schools, I looked abroad. I ended up going to the University of Hong Kong, where I got a degree in International Business for about $21,000. That’s the cost of a semester at a private school, or one year at an out-of-state school.”

Webb isn’t alone. Bloomberg reports that the number of U.S. students studying abroad is 72% higher in recent years than it was in 2000-2001.

“The United States has great schools and studying in America is not at all a bad thing,” Webb told us. “But it’s shocking how much more affordable education is in other developed countries. Even top universities in comparable countries like Britain can be tens of thousands of dollars cheaper.”

The Cost of College Outside of the U.S.

In the States, college students pay about $38,000 per year on tuition alone for a private university. For a public, four-year school, it’s still pretty expensive, at about $24,000. As an in-state resident at a public school, you still pay almost $10,000.


According to U.S. News and World report, the average cost of tuition in the UK overall is $21,365 per year. In Canada, it’s $16,746 and in France, it’s $247.
England, specifically, is one of the most popular destinations for Americans who opt to go to college abroad. In England, international, undergrad students pay tuition and fees that start around £10,000 ($12,300) for lecture-based courses, according to TopUniversities.com That cost increases to £35,000 (~$43,060) or more for an undergraduate clinical degrees. You can check out the average costs at various universities in the UK here.
Here’s another thing to consider: even when the costs of some universities are comparable to prices in the U.S., the degree programs are much shorter. So over time, you still end up paying less.
“In some countries like Britain and Australia, a typical undergraduate degree only takes three years,” Webb says. “Even if you were paying the same tuition as in the States, that basically equals a 25% discount. You’ll be out a year early and have saved a ton of money. I did this and it was awesome.”


Webb pointed out that he did this in Hong Kong, but they’ve since moved to a four-year system like the U.S. For the most part, students in the States are encouraged to experiment with college for a year or two before finally settling on a major. Many overseas programs are much more focused—you enter college knowing exactly what your major is. The upside is, you graduate sooner and more cheaply, but if you change your mind halfway through and want to switch majors, it’ll cost you.

In Some Countries, Tuition Is Free

It’s worth noting that some countries offer tuition at a crazy low price: free.
An increasing number American students are studying in Germany, for example, where tuition is free at public universities. Students do pay a fee, but it’s relatively small compared to tuition. At Freie Universität in Berlin, for example (ranked one of the top 60 schools in the world), students pay a fee of about $350 but that also covers public transportation. Even better, many of the programs are in English, catering to American students. Investopedia lists a few other countries that provide their citizens with free or almost free tuition. For example:
You can still get a great deal outside of Europe, too. Investopedia reports that American students studying in China typically pay $3,000 a year for tuition and fees, and the cost is even lower if you can study in Chinese.

The big question is: will American employers look at your degree as favorably if it comes from a foreign university?

Some Degrees Are Better Overseas

“During job interviews, the fact that I went to Hong Kong is something employers ask about but don’t dwell on,” Webb says. “In my experience, they’ve cared more about my career history.”
In fact, with some degrees, there’s an advantage to pursuing them abroad, Anna Ivey, a former dean of admissions told the Wall Street Journal. For example, business, international relations, and political science are all degrees in which international experience is a plus.
There’s a flip side, though. For example, doctors and dentists might have a harder time bringing their foreign degree back to the states. The Journal reports:

Before practicing in the U.S., dentists with a foreign degree typically have to attend a two- or three-year program at a U.S. dental school, which can cost more than $100,000, including living expenses. For doctors, being able to practice in the U.S. requires passing a series of medical licensing exams and participating in an American residency program. While it’s possible to secure a residency in the U.S. as a graduate of a foreign medical school, it’s typically tougher than with a degree from an American medical school.

Law school is another concern. In most cases, if you have a foreign law degree and you want to practice in the States, you’ll have to continue your education at an American Bar Association accredited school. It should go without saying, but with any degree, you should research the requirements and guidelines for translating a foreign degree for the country in which you want to use that degree.

Beyond the degree itself, you want to pick a school with a decent reputation, too. The good news is, many foreign universities rank higher than U.S. schools in global rankings.

“It’s a mixed bag,” Webb says. “Top foreign schools like Cambridge or Beijing University are well known and respected by international companies, but many smaller schools will be largely unknown. There are a few worldwide rankings of schools that can help you decide. The Times Higher Education and QS World Rankingsare two popular ones. If you’re not certain about a school don’t hesitate to contact other international students who are studying there. If you don’t hear good things, or there aren’t any international students there now, that is a big warning sign.”

You can also use websites like Niche.com or SchoolLinks to look up student reviews and compare colleges. You can research average costs, number of students, test scores, and other statistics, too.

Another thing to consider: some foreign schools want to boost their reputation by attracting international students. As a result, they’ll offer incentives for Americans. Webb was offered a partial scholarship to study at Hong Kong University, for example. (You may even be able to negotiate this!)

Other Costs to Consider

Of course, it doesn’t just come down to tuition. There are other costs to consider, too. The cost of living in some cities can be surprisingly high. Any savings on tuition might be offset by the cost of housing, food, and other monthly expenses. Here’s a neat calculator that compares the cost of living between two cities. Don’t forget travel costs, either. If you have plans to come back home regularly and visit friends and family, that can add up, too.
And then there are student visas. Depending on the country, these can be upwards of a few hundred bucks. More importantly, though, many of them prevent students from working while they’re abroad. Depending on where you study, you may not be able to work to pay for basic living expenses, or your work might be limited. In Japan, you can work for up to 28 hours a week. In Australia, you can only work up to 20 hoursduring the school semester but you can work full-time during breaks. Look up the specific visa requirements for Americans traveling abroad here.
The financial aid you receive in the U.S. might cover your international studies. This typically doesn’t apply to grants, but the Department of Education lists the international schools that participate in its student loan program.
While the cost is usually the most obvious concern, there’s also the culture shock. It can be hard enough to leave your hometown after college, much less travel to an entirely different country. can also be jarring to just leave your hometown college student.

“I think the primary barrier is psychological. Most people don’t want to leave home, and many Americans have never really considered leaving the country for anything but a vacation,” Webb says. “But given how much money you can save and what an adventure you’ll have, it’s totally worth it.”

Obviously, you want to research the country you’re studying in as much as possible before you take off, getting a feel of what day-to-day life is like. For example, the Japan you see in pop culture in Tokyo will be a lot different than the lifestyle you’ll have in a smaller city, Webb points out.
“Going abroad for college was an amazing experience,” he says. “You meet so many different types of people, and have so many opportunities you wouldn’t have back home...It wasn’t always easy, but it was a deeply meaningful experience.”
- December 27, 2018